June 1, 2017 - The Natural Lands Trust announced that they have completed the purchase of Bryn Coed farms.  A significant portion of the puchase was made possible by a successful local fundraising effort.

November 16, 2016 - The Natural Lands Trust held a public meeting to explain the agreement to purchase Bryn Coed farms.  In order to fulfill the agreement, the Trust is working to obtain funding from a variety of sources including public grants and private donations.  The supervisors of West Vincent Township are negotiating to purchase a significant portion of the property to use a future township park using open space funds.  A fundraising campaign to solicit private donations will officially kick off in 2017, however donations designated for Bryn Coed Farms can be made at any time using this link.

September 28, 2016 - The Natural Lands Trust and the Dietrich family reached an agreement to purchase Bryn Coed Farms, a 1500+ acre property, a portion of which extends to just 1/4 mile from the center of Birchrunville.  This is one of the largest undeveloped areas in the region and if it were to be fully developed would have a great impact on our historic village. The sale will take several years to complete and is contingent on obtaining funding. 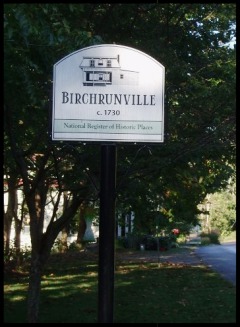 Signs marking the Birchrunville Historic District have been erected on along several key roads that lead into the historic village.

These signs have been facilitated by a donation by the HBNA to the West Vincent Township Historic Resources Committee.

As we noted in the original press release (January 2014), the donation was directed in a way that would raise awareness of the historic village.

A letter from the HBNA Board regarding some recent allegations about the Association.  Read More...

Birchrunville featured as part of the Town Tours and Village Walks program.

Birchrunville featured as part of the Town Tours and Village Walks program.

Supervisors credited the residents for the developer’s decision to sell the property... We thank you for your support of the HBNA which made this possible.

An article about our first event - neighbors and friends came together in order to celebrate our the success of our efforts.

A township supervisor said the case prepared by the HBNA expert team may have been a deciding factor in the schoolhouse developer selling the property.

The deal was announced less than a month after the Conditional Use Application was withdrawn. We have no doubt that this was due in large part to the member support of the HBNA which gave us the ability to engage an attorney and land use professionals to develop our case.

After listening to comments from many HBNA members, the West Vincent Township Planning Commission has recommended against adopting zoning a ordinance change that would affect the Birchrunville (BV) Zoning District.

We have posted information regarding the positions of both candidates on the Conditional Use Hearing and development proposal for the Birchrunville Schoolhouse.

October 23, 2013 - Daily Local News: Legendary musician Jim Croce called Chester County home
Jim spent a lot of time in Birchrunville, at the geodesic dome owned by attorney Hy Mayerson... according to Mayerson, “and Jim frequently hung out and played music at the dome.”  Hy Mayerson posted this video along with his recollections of Jim discussing the Birchrunville Schoolhouse.

Where to Find Us: