In 2004, West Vincent Township sold the Birchrunville Schoolhouse at auction after using it as the township's municipal offices for 40 years. A major development proposal was proposed for the property which threatened the historic character of the village.

In keeping with our mission, the HBNA engaged legal and land use professionals to oppose the development plan and was a key factor in the developer abandoning the proposal.

Read on to learn about the history of the Schoolhouse and our successful effort to save it.﻿

The History of the Birchrunville Schoolhouse

1863 - The Birchrunville Schoolhouse is constructed on a hill overlooking the Birch Run Valley in West Vincent Township, Chester County.  It is situated in an ideal location to visually welcome visitors approaching the National Historic District of Birchrunville. 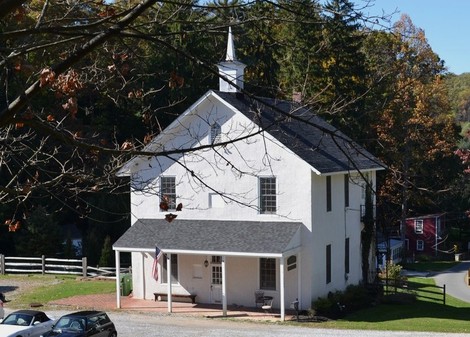 A recent photo of Birchrunville Schoolhouse

It serves as a school building for almost a century and is considered one of the most recognizable buildings in the township.

1953 -  The Birchrunville School closes and students are moved to the newly constructed Vincent Townships Elementary school. Soon thereafter, the schoolhouse is sold at auction and becomes a residence.

1964 - West Vincent Township aquires the Schoolhouse on a .75 acre lot from the Bonaduce family to serve as municipal offices.  Visually, very little has changed since its construction over a century earlier.

1965 - West Vincent Township aquires a 2 ac. tract of open pasture land on Schoolhouse Lane adjacent to the Birchrunville Schoolhouse from the Hibbard family. 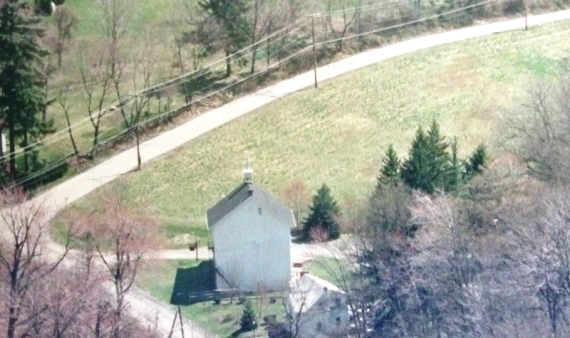 Aerial Shot of Birchrunville Schoolhouse in the 1980s

1990 - West Vincent Township proposes to construct sheds on the 2 acre lot adjacent to the Schoolhouse. In a July 1990 article in the Philadelphia Inquirer, a neighbor voices concerns regarding "the structure's location near the center of the historic village of Birchrunville and the steep, narrow, winding roads that lead to it."  According to the article, the township agreed to take into consideration removing the sheds and returning the property to residential use "if and when the township offices move from Birchrunville."

At a later meeting, it is decided to defer any deed restriction on the future use of the property until after the sheds are constructed. Bids for shed construction are solicited, but all are rejected due to high cost.

1991 - A new design based upon a cheaper pole barn structure is prepared and bids are reopened. A Supervisor notes that the structures "could be taken down easily if the property were sold." 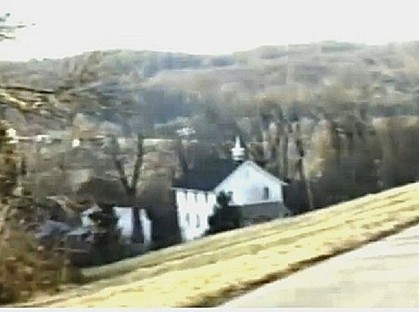 1992 - Birchrunville is added to the National Register of Historic Places. The nomination form lists many contributing buildings including the Birchrunville Schoolhouse.

1993 - Sheds are constructed next to the Schoolhouse. They are unheated structures; one building has a garage door for equipment storage, the other is an open air salt storage shed with no door. In an attempt to mitigate the concerns voiced in 1990, the township plants pine trees to screen the view of the sheds (and ultimately the Schoolhouse) from Schoolhouse Lane. 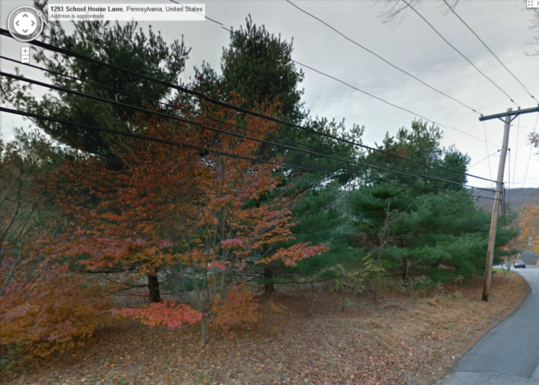 The view from Schoolhouse Lane - 2013

2004 - West Vincent Township moves their municipal offices and rezones the Schoolhouse to allow commercial use. The property in "Charming and Historic Birchrunville" is put up for auction.  No easements or development restrictions are placed on the use of the property. 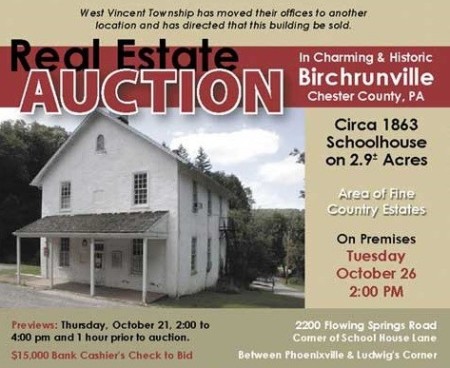 The garage and salt shed are displayed in the auction brochure and the notes indicate that the township has changed the zoning to support commercial or residential use.

The township sells the schoolhouse and adjacent property at auction in October 2004. Together, the two lots comprise 2.9 acres.

In November an attorney represening Birch Run Village LLC, the new owner, presents a sketch plan to the Planning Commission and Board of Supervisors. The sketch shows the sheds replaced by a 12,000 square foot building.

2005 - A formal land development plan is submitted by Birch Run Village LLC proposing to construct 4 buildings varying in size from 1248 to 2250 square feet per building.

2008 - The West Vincent Township Board of Supervisors deny the land development application citing 14 reasons, among them a failure to seek Zoning Ordinance relief from the setback for existing historic structures.

2009 - A new land development plan is submitted by Birch Run Village LLC on December 9 under the 2003 Zoning Ordinance, three weeks before the new 2010 Ordinance takes effect.  This new plan proposes 3 new buildings for a total development size of 10,000 square feet.  A waiver is requested to reduce the 150 foot historic structure setback such that the new buildings can be constructed within 62 feet of the schoolhouse building.

2011 - An engineering review of the latest land development plan indicates that a development of 10,000 square feet or more requires a Fiscal Analysis Impact study.

2012 - A revised plan is submitted which reduces the development size by 2% (to 9800 square feet), eliminating the Fiscal Analysis Impact study requirement.  The request for a waiver from the minimum 150' setback from existing historic structures remains. 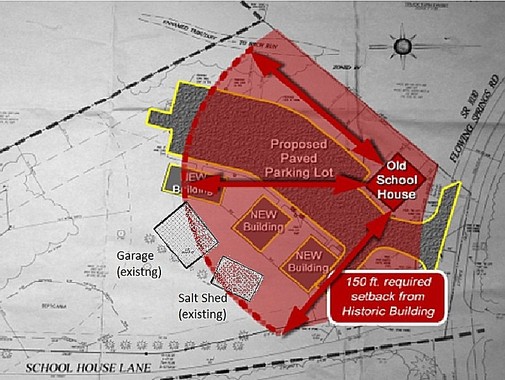 The proposed structures are all well within historic setback. Note the location of the existing sheds - the new office buildings will be constructed much closer to the schoolhouse.

Despite these opinions, the developer requests a Conditional Use Hearing from the West Vincent supervisors and the request is granted and scheduled to begin in October. The Historic Birchrunville Neighborhood Association (HBNA) is formed by concerned neighbors and hires legal and land use experts to build a case for the hearing.

Just days before the Conditional Use Hearing was to begin, West Vincent Township proposed changes to the zoning in Birchrunville to disallow commercial uses other than office buildings.  Residents were not receptive to the content of the proposal (and  perplexed by the timing) and eventually the proposal was dropped from consideration.

On November 25, the township announced an agreement to purchase 2 acre lot adjacent to the Schoolhouse (the former Hibbard tract). The land development plan remains active until the agreement with the township is finalized.  A township supervisor noted that the HBNA legal defense may have been the deciding factor in the agreement being reached. The purchse is expected to be completed in early 2014.

2014 - The HBNA hosted a Winter Celebration event on January 12th to celebrate our community and the successful fight to save the Birchrunville Schoolhouse.

On March 3rd, the Township completed their purchase of UPI# 25-4-79 (the parcel of land adjoining the schoolhouse) for a price of $160,000. Plans to create a passive park are ongoing.

The HBNA Spring Fundraising Drive kicked off on March 15th to raise funds to cover expenses incurred during the successful fight to save the Birchrunville Schoolhouse.

On May 5, the HBNA announced the results of the fundraising drive and that the Association has fulfilled all financial obligations incurred during the effort to save the Birchrunville Schoolhouse.

On August 6, the West Vincent Township EAC and the Park and Recreation Commission met at the park property adjacent to the Birchrunville Schoolhouse to discuss plans for the new township park.  It was suggested that many of the pine trees that were planted to screen the sheds be removed.  The township will solicit a bid to have this work completed in the Fall of 2014.

2015 - As we begin a new year, the township is removing some of trees from the Schoolhouse Park location as weather and time permits.  Visually it is already an improvement, and we look forward to the completed project.

2017 - The Natural Lands Trust reached an agreement to purchase Bryn Coed Farms, a 1500+ acre property, a portion of which extends to just across Schoolhouse Lane from the Birchrunville Schoolhouse Park.  As part of the agreement, the Trust plans a 400 acre nature preserve with eight miles of hiking trails open to the public.  A proposal has been put forth to the Township Board of Supervisors to connect the Bryn Coed trail system to the Park.

Where to Find Us: